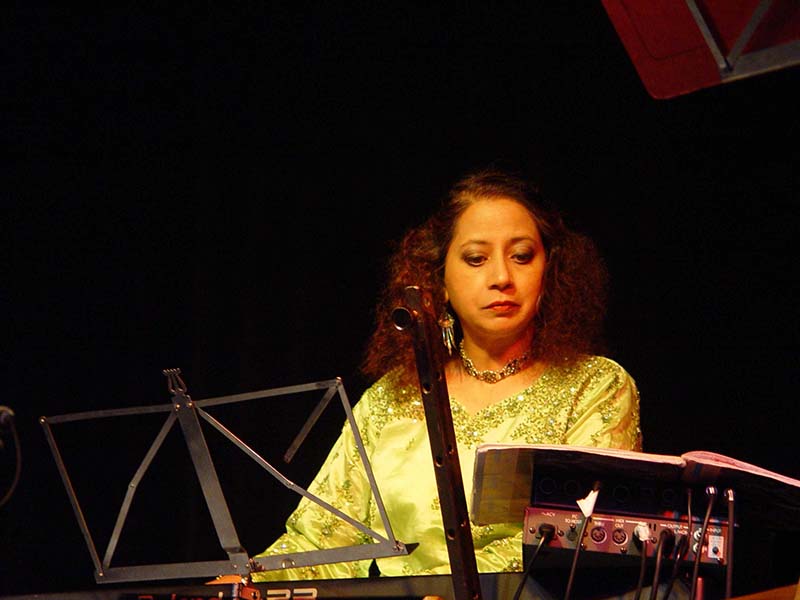 Priti Paintal was born in New Delhi, India  learning piano as a child and later sitar and tabla, and is regarded as a pioneer in the field of cross-cultural music. Born into that includes musicians, eminent scientists and doctors, she studied piano and composition in India where The British Council heard her perform with the Delhi Symphony Orchestra and offered her the chance to train formally in music composition. After gaining her Masters in Anthropology from Delhi University she came to Britain and studied composition at York University and at Royal Northern College of Music, Manchester with Anthony Gilbert.  After completing a Masters in Music composition she went on to get a PGCE in music education from  the University of London.

Priti set up in ShivaNova in 1988 with the aim of bringing together diverse musical styles to unite sound-worlds. ShivaNova (www.shivanova.com) combines Asian classical, African and Western musical influences  to create an original global sound.  Priti’s music brings together traditional, classical and jazz performers in a unique mix of Indian roots and contemporary flair. Her work with ShivaNova includes collaborations with storytellers, jugglers, dancers and orchestras, as well as creating workshops in schools and the wider community. ShivaNova Cds with her music include Polygamy, Urban Mantras, Flying to Sun, Moonlighting, Seventh Heaven, and Secret Chants.

In addition to her group pieces she wrote the mini-opera Survival Song for the Royal Opera’s Garden Venture contemporary opera programme, which was shortlisted for the Olivier Awards. It led to the full-length Biko, the Royal Opera’s first commission from an Asian  woman composer staged in London and Birmingham. Other performers have included the Philharmonia Orchestra – in the premiere of Secret Chants, the title track of ShivaNova’s latest CD, and she has written works for the City of London Sinfonia –Blowing the Fuse, Bournemouth Sinfonietta – How long is a piece of string,  East of England Orchestra – Scarlet Mountain Dances,  the Balanescu and Bingham string quartets – Silk Rhythms,  the Park Lane Sextet, and other singers and soloists.

In 1994, she resigned from the Arts Council’s music panel protesting over the lack of support for diverse forms of music. Then, she, along with many music organisations and independent promoters, she co-founded, THE MAIN MUSIC AGENDA, to draw attention to the diversity of music played and studied throughout the country.

Around the same time she wrote Gulliver in Lilliput, a childrens’ opera for young people from schools in Maidstone, and the multi-media show, Bananas which explored the multi-cultural connotations of the fruit.

More recently she has written a cross-cultural work for Ignite Ensemble – Circles of Fire, a choral piece for Invicta Singers – Out of the night (based on the poem Invictus), a double bass and piano piece for bassist Leon Bosch – A summer space,  Ntsiki’s solo for soprano and piano ( from her opera Biko), and three solo piano pieces for dancers – Elegy 1 (Circles of dance), 2 and 3.

Priti is also a lively and outspoken contributor to radio and TV. She has written for The Guardian, and been featured in The Independent and The Daily Telegraph, on Songlines, and BBC 3 and many times on Womans’ Hour. She has been on the Arts Council Music panel, on the board of South-East Arts, and on the board of Overtones. She was also on the board of Kent Music’s Soundhub where she was trying to diversify and broaden music provision for Kent.  Recently she is Chair of the Diversity Arts Network in the South-East which explores issues around diversity, inclusion and equity.